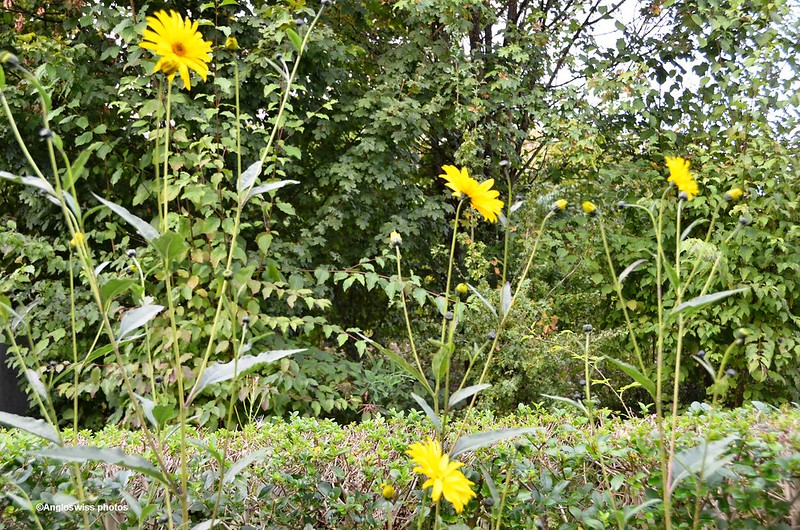 Autumn is nearly here.   The slugs have disappeared at last and my tall yellow daisies are flowering. They are always the last to flower in the garden. They begin their growing season already in Spring and at the end of Autumn they are flowering.

We have been having a so-called Indian Summer. Pleasant temperatures, now and again some sun and a little rain. There are still some creeping insects in the garden, strange insects that are not usually seen, but they seem to be harmless. A blackbird pays a regular visit in the morning, but not for me. She is searching for a nice fat juicy worm, probably stocking up on her winter fat, although there is always something to scrounge at my place.  I will now have to organise the bird feeding station for my feathered friends.

“Yes Mrs. Human, that is a good idea.“  ”Tabby cat, I did not know that you was such a bird friend.“

“Of course I am Mrs. Human, I love birds, especially the smaller kind. I can get my teeth into them much better. The big birds can be complicated to catch.“

“That was not my idea Tabby. I was thinking about feeding them in Winter and not encouraging them to feed you.“

I don’t think she did see what I meant, but that is cat philosophy.

And so life goes further in my part of Switzerland. Probably in a month or so the ground will be covered with snow and nothing more will be growing. The garden will look dead, but beneath the earth it is alive. Insects will be resting and waiting for the arrival of warmer weather. My slugs will be curling up somewhere in the undergrowth in a sludgy sleep. As far as I am concerned they can sleep for ever, but even they will return with revenge, especially if we have a damp Spring.

There will probably be a few weevils chewing at some underground roots, ready to appear as a fully developed May or June beetle on their marriage flights if they are old enough.

In the meanwhile the remaining apples have been collected and Mowy, our automatic mowing machine, will be put into hibernation during the Winter.

Even the most laid back and egalitarian among us can be insufferable snobs when it comes to coffee, music, cars, beer, or any other pet obsession where things have to be just so. What are you snobbish about? 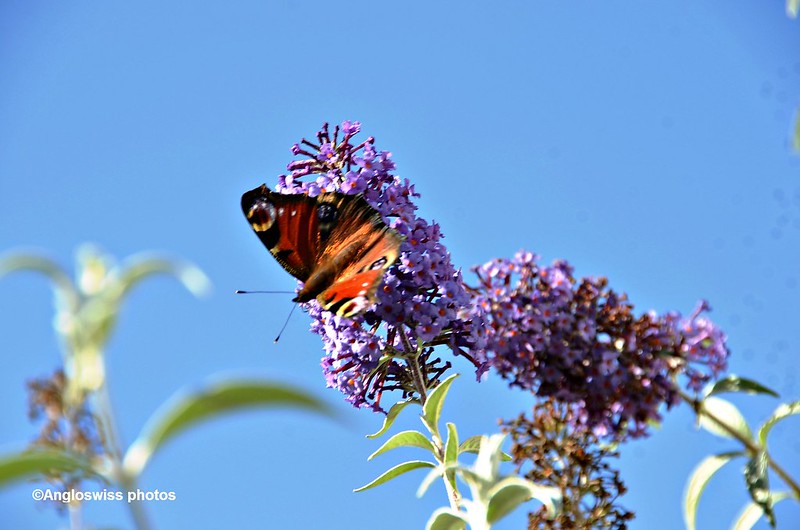 “Hello Peacock butterfly, hello, you are not talking to me?”

“If I have to, but I am just here to be admired. I do not usually stoop to talk to a human.”

“Oh I see. I was just taking a photo to show everyone on my blog.”

“In that case, go ahead. After all I am the most beautiful in the garden.”

I suppose she is right, she is the most beautiful, but not very long. Her beautiful days are numbered. It is now Autumn and she is one of the last. That was probably the reason she was sitting quietly for me to take a photo. Otherwise she flutters around with no time to spare for a photo. She is not a snob, she was just born that way.

And me a snob? Mr. Swiss found I do not know the meaning of the word, although I have my tastes. When you grow up in a family where it was normal to live on a weekly wage, you have no real chance to become snobbish, because you would never have what the others have, unless it fell off the back of a lorry or had origins which are better not known, like the two bottles of Navy rum dad brought home once from work. A day later they were reported in a TV programme being part of a robbery. They were stolen goods. Mum washed the labels off the bottles and emptied the contents into another bottle.

And now to my snobbishness: I am not snobbish about my clothes, how can I be a clothes snob when I can be glad if they fit. Designer shoes are no longer my thing; it is a question of balance in the high heels.

I am a tea snob. I only drink Twinings tea. Perhaps it is the pretty box, but I am convinced that it is the best tea available. I do not like hand-me-downs or second quality. I would rather refrain from buying something I want if it was not A1 quality. I like new. I am convinced that the stork dropped me at the wrong door. He should have flown further to the Mayfair area of London, known for its wealth, or perhaps even dropped me off at Buckingham Palace, the queen’s joint. I was sure it was not my destiny to by flopped into the East End of London, renowned for its poverty and poor housing (slums).

However there must have been something worthwhile in my genes as I managed to qualify for a grammar school and make my way in the world. Was it snobbish that I left London for Switzerland? Perhaps in the back of my mind I wanted to achieve the unachievable.

My next plan is a new computer of the Apple kind. On the other hand it is expensive and I will not buy it until I master its internal workings. I learnt to be careful with my money. I have also decided I want/need a new Kindle for my books. I have one of the first generation not even a paperwhite with built in lighting effects. I read via an app on my iPad. A new model will be introduced next month and that is the one for me, with 3g of course to enable me to upload my books all over the world (I do not really go all over the world). Is that snobbism, probably is, but I cannot take it with me when I go and I want it now. I can tell everyone I have one, although they will probably not be interested.

I am not really a food snob, I eat almost everything, but I like to know the origins. I am not a happy restaurant eater. It is nice to be invited, but I am suspicious about what is served. Where did it come from, how did they prepare it in the kitchen?

I am not a grammar snob, I cannot afford to be a grammar snob. My English is tinged with a European German touch. English people even remark I have a European accent when I speak English, although I have to discover what that is. I am unique. There are not many cockneys that speak with a European accent. On the other hand when I speak German, people try to guess. Is she dutch, or is it a strange new Swiss German dialect that she is speaking? I do not know where the dutch touch originates, but probably because no one really thinks than an English person can chat away in a language that is not English.

I am a lazy writer. I write as it comes into my polyglot brain, so put up with it. I have a snobbish brain.

My daily prize suspicious blog now comes to an end. Do not despair, I will return tomorrow with wise words and gems of intelligence. I am unbeatable in blogging (is that being snobbish?).

Daily Prompt: Upturned Noses – Me a Snob? Of course