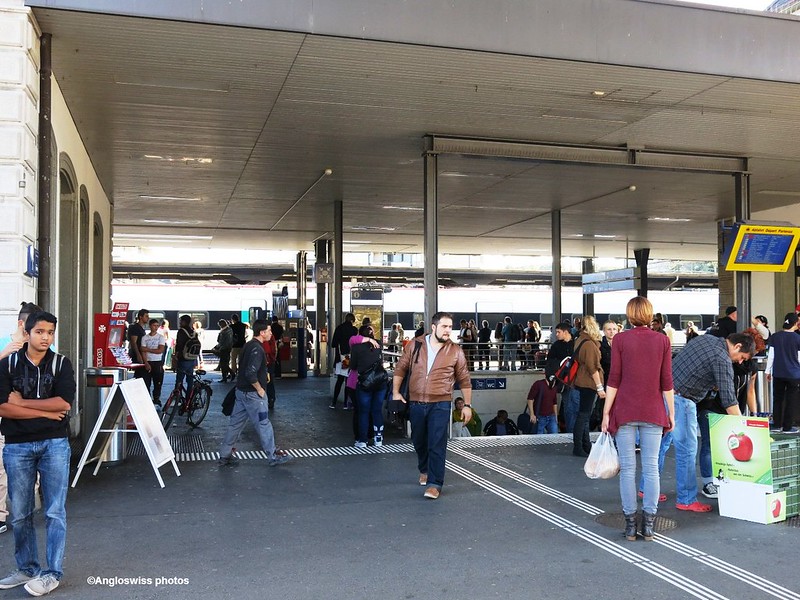 When the kids were smaller (there was a time when I had four at home), I was sure I lived on a station and was permanently in transit. Swiss schools find that an early morning start is positive so I had two kids to be at school by by 8 o’clock in the morning. They had to be washed, dressed and fed. Mr. Swiss had already left the home station an hour before, yes the Swiss are an early nation. I was left with the baby and the other son that was picked up by taxi an hour later (autistic and in a special day school). The baby had no time table, he just screamed when he wanted something or might have discovered something new to torment mummy with. Who cares? It was all part of life. Later when the kids could be farmed out to various places where they were safe, they let me out. You think an airport terminal or a railway station is full of distracted, stressed zombies? Forget it, the world of family and work invented the stress. The rest is just supplementary.

But now to the real thing. The photo is of the local Solothurn railway station somewhere in the northern part of Switzerland. Being a small country, our train system is very easy to follow if you know where to go. Solothurn has no problems. Platform 1 comes from Geneva on the border to France (with a few changes on the way) and goes to Romanshorn on the German border via Zürich. If you come from Zürich you arrive at platform 3 and if you want to go to Bern, that is quite adventurous. We have a small direct line from Solothurn to Bern, stopping at a few country stations on the way on the other side of the station. It takes about an hour.

So you arrive at the station. Perhaps you just want to buy a newspaper at the kiosk. No problem. There will definitely be someone, usually a young man, sometimes a young lady that will approach you and get quite close. They are not really trying to be friendly. No, generally they are asking if you have a few francs for an overnight place to sleep. Yes, even in the country of bankers we have our problem people. You might feel sorry for these people. Do not. They actually need the money for their dealer to purchase whatever they purchase from the dealer.

If you see a gentleman dressed in a suit with a tie and pulling one of those bags on wheels on Platform 1 then he will definitely be going to Zürich Airport for a business trip. He will climb into the first class compartment when the train arrives to complete the business image. I usually travel first class when I go to Zürich Airport, but that is because I am usually so stressed out before I arrive at the station with my case, passport, flight ticket and whatever that I need to compose myself before arriving at the airport and 1st class is quieter, less stressed and the seats are comfortable. The journey is one and half hours. If you are lucky you have a direct train to the airport, otherwise you might have to change trains in Zürich main station. No problem, with Swiss efficiency it is all perfectly co-ordinated.

It is difficult to find an interlocking human stories as waiting at a Swiss station is something like a meeting in the United Nations without interpreters. Half an hour going West they begin to speak French as opposed to the Swiss German that we speak, so do not bother to engage anyone in a conversation as probably they will look at you as if you arrived from another planet and might say “pardon” if they are polite. We have many immigrants from east European countries and Turkey. They think they can speak our language, but it can become confusing if they are talking to each other.

Talking to the students from the high school that are circulating is a lost cause. They do not hear you, they have all substituted their ears for some sort of plastic hearing aid with a cable attached to their telephone or iPod and might be swaying to the music. There are the thoughtful students, another waste of space. They are busy clicking on their iPhones and talking to a friend. If they have face time they have attained the peak of communication. They even see who they are talking to.

We have a small station in our village, but that is a real meeting place. If you take the train you know when it is arriving and when it leaves. Generally village inhabitants congregate at the station a few minutes before the train arrives. You greet each other and as everyone knows everyone else, you engage in a conversation.

I noticed I could not really find anything amusing about railway stations in Switzerland, probably because the Swiss consider travelling a serious matter.

Daily Prompt: In Transit – in Switzerland