How often do you get to (or have to) be awake for sunrise? Tell us about what happened the last time you were up so early (or late…). 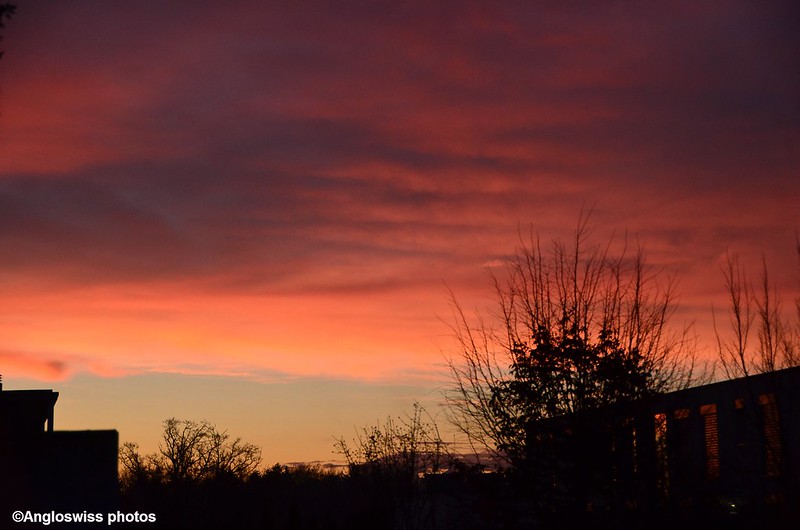 He who searches, finds and I actually found a photo of a sunrise. It was taken from my garden. It must have been early winter, as the sun rises too early for me for a summer dawn. If I do arise at the crack of dawn it is usually a human need that spurs me on to the bathroom. Generally I return to the comfort of my bed afterwards and do not peep through the closed blinds to see if the sun has risen. Who cares? Only the birds and they have it in their little throaty system. They are sometimes a nuisance, waking me with their continuous whistling and peep, peep, peep, but luckily this only happens in high summer. As soon as daylight decreases, they give up and sleep a little longer in the morning.

I noticed my file of sunrise photos in Flickr is sparse, just a few. I love those prompts where somewhere it says “tell us about etc. etc.” I feel as if I am at a confessional admitting my wrong deeds. Sunrise exists, but I very seldom see it. Even when I was a working lady and rose in the morning at six I did not have time to look out of the window and admire nature’s gift of a rising sun. Generally I had a misty veil covering my eyes from sleep or I was too busy groping my way to the kitchen for a few bites of food. Afterwards I entered the shower, checked that son No. 1 was ready to depart and we were off in the car to work. Even on the road I had no time to adore the illuminations of day break. I dropped my son off and then I arrived at work. I was too busy concentrating on the traffic to look out of the car window.

Sometimes I arrived at work and a friend would say “did you see that sunrise?” knowing that I always had a camera with me. “You should take a photo”. Spurred on by her enthusiasm I searched for a window at workd showing the sun which was now covered by grey clouds, thus I have no photos of dawn from my working days or perhaps 7 o’clock in the morning was too late.

Sometimes my cat might wake me at an unearthly time with a few harmonious meows which I interpret as being “let me out” and for the sake of peace and quiet I make my way to the kitchen to open the window. Unfortunately this does not always coincide with their wish. Tabby has the habit of deciding to eat a plate of vitamin concentrated pellets before leaving. Unfortunately Tabby does not like being rushed when eating – don’t we all? She would make her way through the pellets, chewing each one carefully and thoroughly whilst I was waiting for her to decide to leave the safety of home.  Cats unfortunately are not influenced by wonderful sunrises and just go when they feel like it. It is often an hour before dawn when Tabby decided to go for her nocturnal walk.

We have a cat flap, but it is only open from the outside. If I fixed it to be open from the inside I have a blind cat that would decide to make the great escape sometime in the night. This has happened once or twice, through a false manipulation by human hand and it is not funny to stumble in the dark outside searching for a wandering cat. He was always found. Luckily he is a blue tabby. Ok, he is not blue, but that is how he is described. In any case when he is clean he is whitish which made his discovery easier.. Of course he was glad to be found, although it needed quite some persuasion to bring him home.

I never did voluntary sunrises, they just sort of happened. In my younger days in London I would often stumble home when the sun was rising, but I did not either appreciate or notice it. This was generally due to an encounter of the other kind, or perhaps a meeting with friends. I had a friend at my workplace in Switzerland, she lived on a farm. I said how nice with all those animals. She said it was just her way of life and the cockerel often crowed in greeting when she arrived home in the early morning hours.

So there we have it. New dawns are not my thing. I am more for dusk when my corner teeth grow longer, nice and white and pointed, and I take a flight to the local blood bank.

9 thoughts on “Daily Prompt: New Dawn – there are dawns?”