We often hear strange snippets of conversation as we walk through public spaces. When was the last time you overheard something so interesting, ridiculous, or disturbing you really wanted to know what it was all about?

I had just had breakfast in the morning, was still in my night attire – no sexy nightdress, just plain cotton in yellow and decided on a quick inspection of the garden before I began my daily chores, like playing with the vacuum cleaner and running down the computer. It was then that I heard the above conversation. This was interesting. Is someone doing something usually done discretely: no, it could not be but the aahs and ooohs were definitely coming from a corner of the garden.

I decided to investigate. I changed into my super pink plastic garden clogs to avoid spreading muck in the apartment as it had rained quite heavily during the night. It was then that I saw them. I felt so guilty watching two of a kind doing what two of a kind usually do, but stop! Slugs are not two of a kind, they are hermaphrodite, they have both the female and male equipment. At first I thought the female part was laying eggs. I decided to see what Internet had to say so I did a quick surfing exercise and saw a photo almost the same as mine. 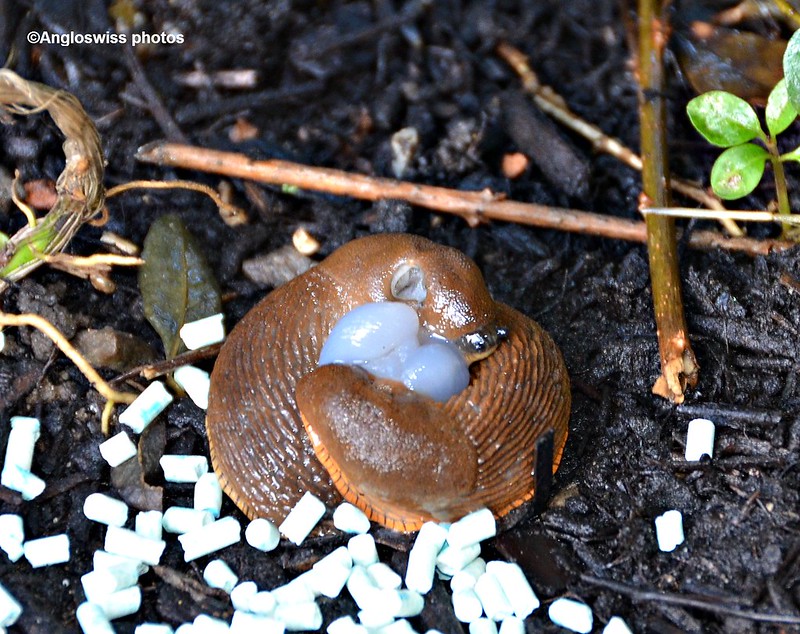 I thought “how sweet, mother slug has just given birth and daddy slug is hugging her proud of the achievement”. This was completely wrong. In the meanwhile I heard again “You are great, and what a sexy snail you are.” The answer was “oh, this is wonderful, I could stay like this all day.”

Yes, people (and don’t tell your kids if they are under age), slugs do it just the same as we all do, but there is a small difference. What you see in this photo are two snails entwined making babies. The white jelly-similar protruberences are the snail’s dangly bits. It seems the male part of the operation is for all to see and they do it both at the same time. The fertilisation of the eggs is all done behind the scenes. Basically these two slugs are enlarging the slug population. In two weeks there will be probably about 20×2 eggs deposited in my garden to prolong the eating spree of my plants.

I feel a bit guilty. I was eavesdropping on a private conversation between two snails and they were having fun in the middle of a patch of snail pellets, so probably there will be no screaming, munching slug babies as a result. Not only was I a peeping tom, but also a murderer

Actually there was quite a noise in the garden yesterday evening. Due to the rainy season there were many slugs, but mostly discussing where they could get a good meal. One got quite high, he found room on the top of an ant bait container and he was hugging with all his slimy energy. I do not know whether the ant poison has a negative effect on slugs, but the opening in the plastic was not big enough for a slug to squeeze into. Perhaps he/she was just getting high. Many went for a slug flight to a patch of weeds outside my garden. My aim is becoming quite good when I throw them.

They did not let me out today so I do not have any other interesting conversations to tell, and if I did they would be in Swiss German.

12 thoughts on “Daily Prompt: Head Turners – Sex in the garden”