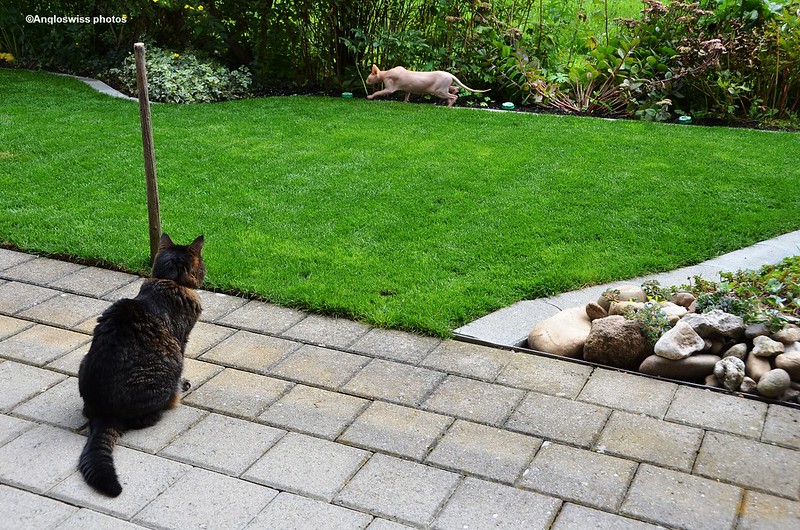 “Tabby, stop howling and hissing, it is a cat the same as you are.”

“Mrs. Human, that is not a cat. I am experiencing close encounters of the third kind. That is not feline. It is something extra-terrestrial. Mrs. Human we are being invaded.”

“Tabby, first of all it is a sphinx cat and it is born that way.”

“No self-respecting feline is born that way. It is a curse placed by one of those cats they used to burn at the stake. It is bewitched, and is a threat to our existence. Terminate, terminate.”

“Tabby you are not a dalek and it will not be terminated. It lives in the apartment opposite and now and again takes a walk, the same as you: you know the feline instinct about marking territory and the Sphinx is new in the neighbourhood and is just finding its way around.”

“I don’t believe it Mrs. Humane. Has your brain already been infiltrated by this strange creature. Has it already brainwashed you into believing it is one of us? Never, that is not normal. It has folds in its skin and big naked pointed ears and it smells.”

“All cats smell Tabby, and each has its own scent. The sphinx race just happens to have no fur to absorb the scent, that is why they are bathed once a week, too keep them smell free.”

“Is that one of those strange human jokes that we felines do not get the hang of? Cats do not take baths, we have a good lick, although to be quite honest if I had a fur shortage I would also not be keen on licking what was undernearth.”

“Tabby you know that not every cat looks like another. They have different colours, different length of fur …..”

“..and different smells. Most of the smells are just, well, feline. But this naked example is not feline, it is different, it is not one of us. It must be separated, terminated.”

“Tabby do not be such a racist.”

“Me, racist, never. The proof is that I allow humans to live with me. If I was racist, I would not allow you to feed me and empty my litter box. Yuck, just imagine emptying a litter box for a naked cat. I bet his recycling process is different to mine.”

“Hold on, Tabby. Be kind to those that are different. I am sure the little sphinx feline just wants to be your friend. It is so lonely not knowing any other cats.”

“No, no way. I also do not know any other cats except for Fluffy and Fluffy is not my friend. I just put up with him as he happens to eat from the same dish as me and use the same litter tray. Otherwise we do not walk paw in paw and look at the moon in the evening together. Imagine touching a naked cat, no Mrs. Human. Just ensure that he stays on his side of the fence and I will have a quiet growl from my side of the fence.”

There you have it, sometimes I think felines are not so different from humans. I will keep you posted if the situation changes. Perhaps one day they will walk together and eat from the same dish, but perhaps not.

“Forget it” and Tabby has the last word. 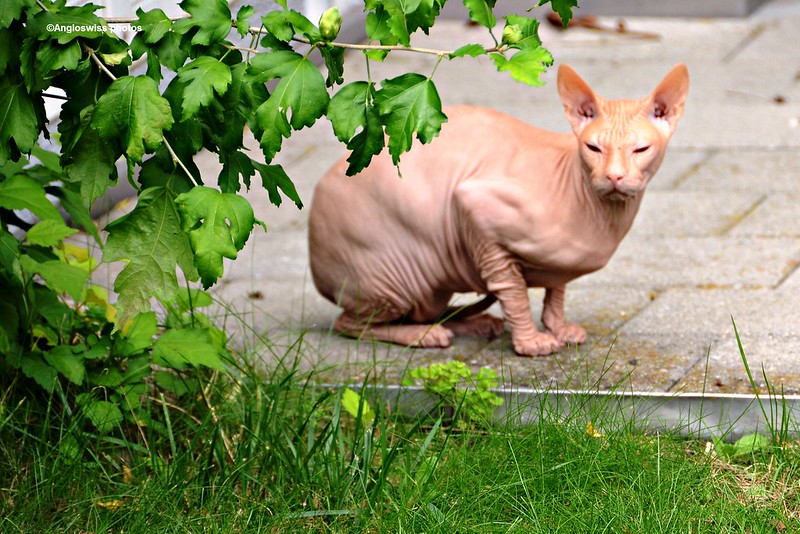 8 thoughts on “When a Tabby cat meets a Sphinx”