What’s the best (or rather, worst) backhanded compliment you’ve ever received? If you can’t think of any — when’s the last time someone paid you a compliment you didn’t actually deserve? 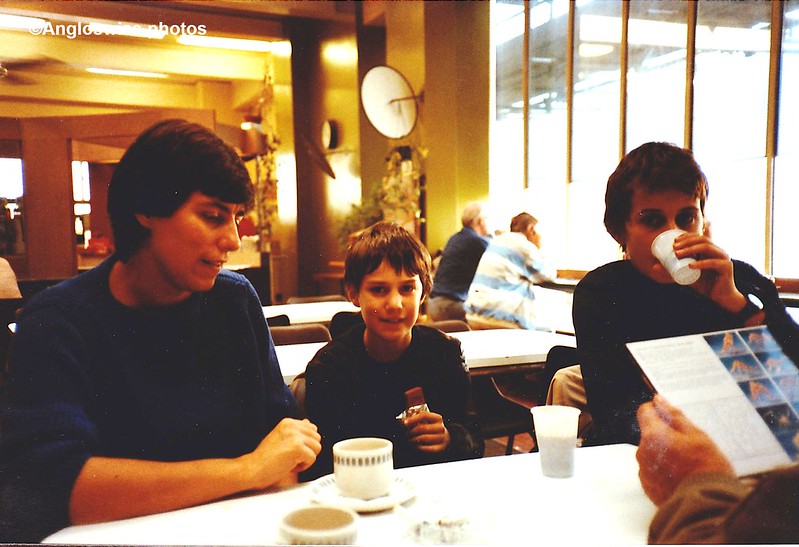 I have been scanning some old photos into my computer taking by a real live camera with film. This comes from a series taken on a trip to London in 1984. You see, George Orwell was wrong. There was no big brother watching us, just mum aged 38, keeping a watchful eye over No. 1 son aged 14 and No.2 son aged 10. Probably a good moment as they were behaving and smiling, although with a chocolate bar and a drink of coke I suppose they were happy. I am sure the photo was taken in the cafeteria of the Natural History Museum in South Kensington in London where we had a rest after viewing dinosaur skeletons and large sized wales. Happy memories of days gone bye.

Today I am 68 years old, my hair has turned to grey and my figure has gone South. I get compliments on my age. “You have no creases” (at least not on the visible parts) and “you look so young” which is proof that looks do not always tell the truth. I no longer feel so young, and wonder what mysterious ache will appear next. Since two weeks I have had pain in my left hip, resulting in a visit to the hospital for an x-ray. My doctor departed for a holiday and so the pictures of my left hip bone and attachments are lying somewhere on an abandoned desk until she returns. In the meanwhile I have taken all the Ibuprofene tablets which did not seem to help very much and now just have a packet of pain killers. These knock me out when I take them so I reduce them to a minimum. I have now discovered that I feel fine if I do not have to stand on my left leg. In the last couple of days it seems to have got better and I can now sit on a chair without having to check if my left leg is still there. Sleeping has improved and I decided if I ignore the pain it might go away. My doctor will return from her vacation next week, but probably I will be cured by then Yes, it is a do-it-yourself world.

I am not very good at compliments and am usually at a loss for words if given one. However I very much treasure the compliments I receive on my blogs from my brothers and sisters in arms on the Daily Prompt. We all have to suffer the prompts that are sometimes not very prompting, but we continue and face the obstacles put in our way. This week we had a man in a WordPress t-shirt digging a tunnel and a robot ready to deal with a selected chore. I am still clearing the mess away in the cellar and Wordy the robot is now in the corner of my storage room. He collapsed on the second day and I cannot get the spare parts.

I always deserve compliments; my life is built on fishing for compliments. Unfortunately not all agree with this point of view. I am ignored by the Pulitzer people and the space on my shelf for a Nobel Prize is still empty. I don’t even have a WordPress t-shirt. To be quite honest, I did receive a freshly pressed once from WordPress and honestly I did not have to bribe them. They did it all by themselves.

I am not sure about a backhanded compliment. If someone says you are 100% chaotic, are they praising my special individual thinking process or should I take it as an insult. When I was a working woman my colleagues found I was an organised chaotic. I had a mess on my desk, where everyone else had neat piles, but I always found what I was looking for. My brain was organised to function in this way. If I had had neat piles, I would probably not have known which pile to search in.

Mr. Swiss often compliments me on my cooking skills, although today we had a small problem which almost developed into a crisis situation. I do not like mashed potato so I avoid cooking mashed potato. There is a gooey mess to be cleared away and a sticky special machine to wash up afterwards. However, my Swiss cookery accompanying organisation advertised their new specially constructed potato masher. It was based on the original, but had a few refinements. As I have learned to rely on this organisation and they do have good ideas, I ordered one. It was at a special price but I had to pay extra 7 Swiss francs for the postage. Yesterday it arrived. I was busy constructing yesterday’s lunch and Mr. Swiss unpacked the machine and fitted it together. There was a recipe book delivered with the machine and it looked good, so today’s meal was planned. I bought special mashable potatoes and cooked them. The machine was ready. You balanced it on a saucepan, put the potatoes in it and turned the handle. The mashed goods landed in the saucepan. Unfortunately by the first turn the mechanism made a click and fell apart. Undaunted I fitted it together again and continued. The click repeated itself. Eventually I had a mess of sticky potato on the kitchen surface, some escaped potato from the machine and no mashed potato in the saucepan with a pile of cooked potato waiting to be mashed.

There was an exchange of profanities in the kitchen, the new wonderful potato masher was cursed and I eventually did it all with a fork. At least we could eat it, if you like it cold with lumps. I will not explain what happened to the hamburgers in the meanwhile which were sizzling in a pan.

Needless to say Mr. Swiss wrote a letter (I cannot write German so well – too many mistakes). I signed the letter and this afternoon Mr. Swiss took the new machine on a journey to the nearest post office, where we paid another 7 Swiss francs to send it on it way back to its origins. I still do not like mashed potato.

Daily Prompt: Why, Thank you? – I don’t really do compliments

18 thoughts on “Daily Prompt: Why, Thank you? – I don’t really do compliments”