What’s the first line of the last song you listened to (on the radio, on your music player, or anywhere else)? Use it as the first sentence of your post. 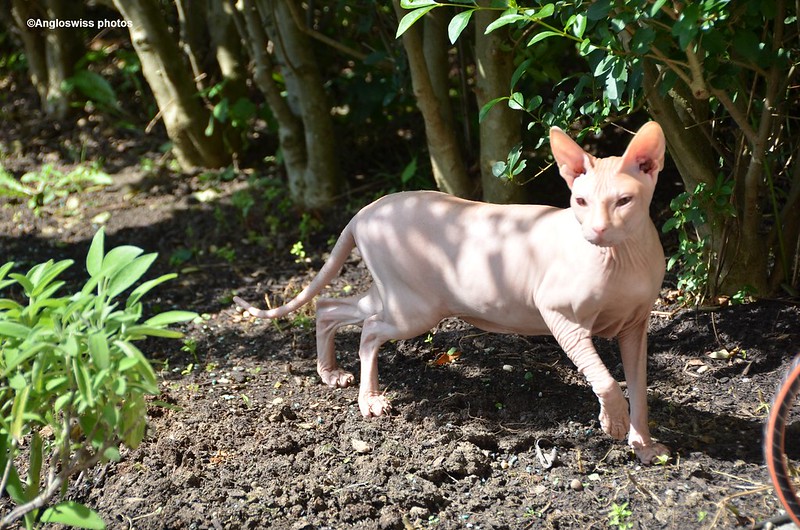 OK, it was not just a cat, it was my favourite photo cat, the neighbour’s sphinx cat. The one who looked like it could use an iron to flatten the creases, The cat that looks like a statue when it is still.

“Just a minute, I have to get my super DSLR camera. It is in the apartment.” We were outside on the porch.

“But we are eating lunch” said an irate Mr. Swiss.

“I cannot allow a lunch to interrupt with a prize suspicious photo of our local feline attraction” was my answer, and so I disappeared into the apartment and arrived with my super heavy bulky professional camera. The sphinx had moved on to the neighbour’s garden and I decided to follow. I think I heard Mr. Swiss in the background muttering something about the food getting cold, but it was my food and the risk was worth it.

I followed the sphinx to the bushes in the next garden where he disappeared. I returned to the table and Mr. Swiss breathed a sigh of relief. The sphinx was curious and suddenly he appeared at the edge of our garden. Disappointed glance from Mr. Swiss, but my camera was now on the table and I began to shoot. The sphinx moved and I shot again, I spent the next five minutes following a sphinx cat in the garden and was happy with the results. My dinner was cold, but who cares. I had some nice sphinx cat photos in the camera.

OK, I know this has nothing to do with the first line of a song I listened to, but I very rarely listen to songs and would never remember the first line in any case. Of course, I could look it up on YouTube or Aunty Internet, but I do not have time for such distractions. There is too much happening otherwise. On the other hand, when I think of it, I did hear some music this morning. Mr. Swiss was helping me with an ironing job. I had bed linen to iron (duvet and pillow cases) and he took over for me. To assist with forgetting various health issues, he had a musical accompaniment. He just informed me it was Chet Baker. Basically there were no words, just music and as I was busy giving my 17 orchids their weekly ration of water I did not have time to concentrate on the beat or the music and there was no first sentence. It would have been a good prompt if I had listened to something worthwhile listening to, but on Saturday morning I have other things to do.

The sphinx cat appeared again this morning, but I was in the middle of mopping the kitchen floor, so I had to give it a miss. Mr. Swiss informed me that it was a male example of the sphinx cat race, although that was not a difficult problem to solve, as there is no fur to cover the important bits..

I can now hear the sound of a vacuum cleaner in the background. I think Mr. Swiss was probably visiting his hairdresser, and again has his special Bruce Willis cut, so the remains have to be removed. I wonder if Bruce Willis does it himself as well. I hear music again, perhaps we will be lucky. No – it is light classical music, background music and again no words: the tastes of two golden oldies.

So with the hope that tomorrow’s daily prompt might be something more inviting, like “did you survive Saturday?” or “tell us about how you have fun on Sunday” I will leave you.

See you all on the flip side and have a nice week-end.

Daily Prompt: Opening Lines – I don’t have any

12 thoughts on “Daily Prompt: Opening Lines – I don’t have any”