A misused word, a misremembered song lyric, a cream pie that just happened to be there: tell us about a time you (or someone else) said or did something unintentionally funny. 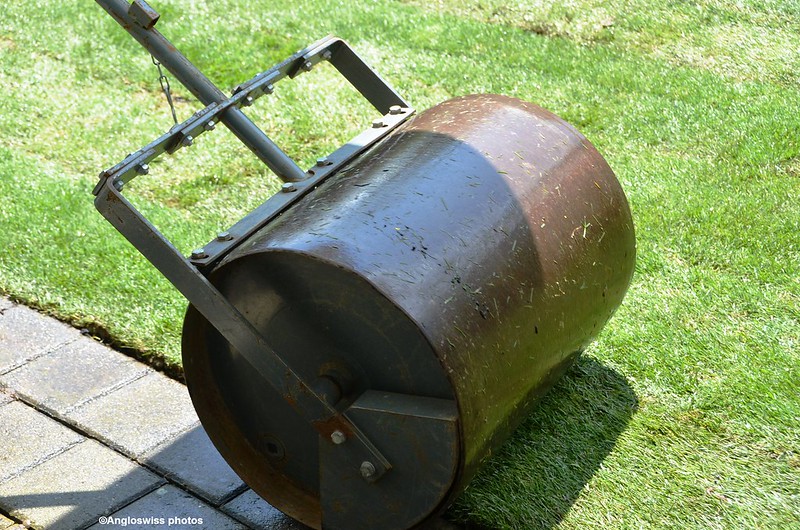 I misuse words constantly, but I ignore it. I just squash them; flatten them like the roller they used to flatten my new lawn. Eventually you just hope the mispronunciations disappear. It is an occupational hazard if you have to speak Swiss German daily and your mother tongue is English; a source of amusement, people laugh and find it extremely amusing. Generally someone says “she’s English” which is probably an excuse for all mistakes. I have lived with this situation for the past 45 years of married life. Mr. Swiss gave up some time ago. He understands me and I understand him, so what could possibly go wrong.

I have a problem with certain letters written in german as ü, ö and ä. Of course they are the same letters known to us in our alphabet, with the exception of two little dots on top. You think you can ignore this, it is just a German thing which has no real meaning for someone speaking English, after all the English language rules the world (if you are in an English speaking country). These two little dots form a world of difference. If you say Buchse or Büchse in a sentence you might be greeted with peals of laughter, but “she is english”, someone says and people nod sympathetically. Büchse means can and Buchse means femal connector or bearing brush. The pronunciation is different. This is often a cause for laughter and people giving you sideways looks. The problem is that in my close family no-one tells me and so I continue happily on my way with my strange way of pronunciation. Do I care? No, not really. One of my hobbies is talking and listening to my own voice. Most people know I am not from Switzerland, so life goes on. Perhaps I am lucky that Mr. Swiss speaks good English, otherwise we would never have understood each other in our days of “getting to know you”.

There are four official languages spoken in Switzerland. I suppose I am happy that I did not arrive in the French speaking part of Switzerland. I would have problems speaking French. I can speak the language, but something commonly known as Franglais (a mixture of anglais (English) and French). There is a small problem being married to a Swiss with a French name (e.g. Mr. Swiss). I have avoided pronouncing this name (although it is a nice name) throughout our married life, by using terms of endearment. If we have a small disagreement other names might be used, but this is mutual and suffice it to be known that in writing he is known as Mr. Swiss – he prefers to remain anonymous in my blogging life.

Tell us about a time you (or someone else) said or did something unintentionally funny. Sometimes I miss the point, as I prefer to listen to my own voice, but yes, there is something that stands out in my memory. It was in my working days and a new girl arrived in the office. We were showing her how things worked and she was a very nice person. She met our boss. Our boss at the time was under the impression that he was God’s gift to womankind, so we girls let him believe this. It kept him in good humour. He had his own way of working. If a problem cropped up in the office, he would give it to the lady responsible with the remark “make sure it is fixed” and so life went on. He had no problems, we gave him the answer “we will have a look” and everyone was happy. In the morning he waited until one of the females brought him a cup of coffee to his desk. I did not, but there is one born every minute that wants to do the boss a favour. If he had crept on his knees dying of thirst and arriving at my desk, I would have ignored his wish for coffee. He was under the impression it was a woman thing and I was under the impression that the workings of a coffee machine were not too complicated for a man.

I am digressing. After this new lady had worked in the office about a week, she said something which really broke the ice and we all loved her afterwards. “The boss, Mr. ???? (no names mentioned – we do not want to discriminate) What is his function?” She did not say a lot, but these four words summed it up. I think each one of us (we were four ladies in the department) could not give her a suitable answer. I suppose he had a function, but it was hidden. Needless to say this statement was a cause for amusement and we were still talking about it when he no longer formed a pillar of masculine authority in the department.

And so life goes on. When I arose from my golden oldie midday sleep today, I was on my way to the kitchen to prepare a caramel flan with whipped cream.

“Are you planning to clean anything? Do you have any physical jobs to deal with?” asked Mr. Swiss, hoping for a negative answer.

Actually I had almost forgotten that I had one window to clean, left over due to lack of time. My afternoon was destroyed, I was not free. On the other hand, what’s a window, as long as we can see through it. I might do it after I have uploaded this super blog. See you all on the flip side.

Daily Prompt: Uncanned Laughter – I will have to find the can opener

20 thoughts on “Daily Prompt: Uncanned Laughter – I will have to find the can opener”