This is clearly subjective, but some words really sound like the thing they describe (personal favorites: puffin; bulbous; fidgeting). Do you have an example of such a word (or, alternatively, of a word that sounds like the exact opposite of what it refers to)? What do you think creates this effect? 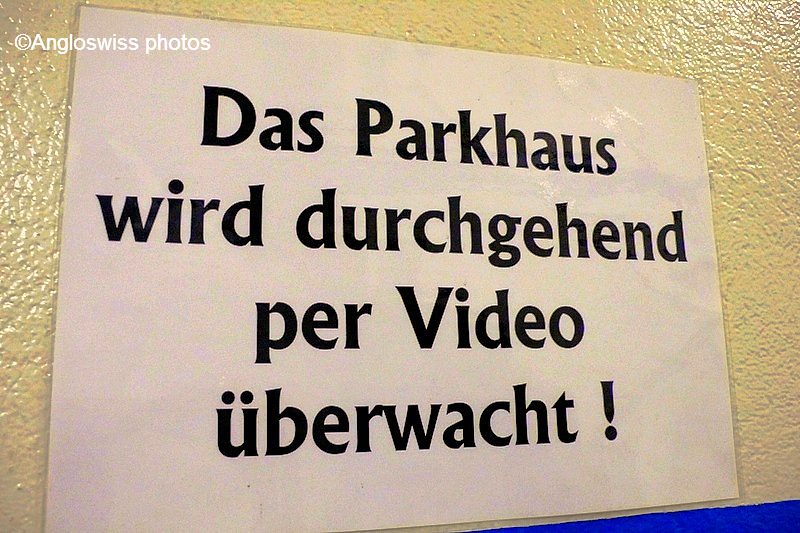 Gottfried Stutz everyone must see that this is an important notice, otherwise there would not be an exclamation mark at the end. Who was Gottfried Stutz? Not even the Swiss know that exactly but his name is applied when you are excited and want to emphasise your words. Gottfried Stutz, close the door it is draughty. Gottfriend Stutz, what is the matter? It is not exactly swearing although it seems everything beginning with the prefix “Gott” could lead to a controversial issue in Swiss German or even high German. Oh and the notice just says that the parking house is constantly observed by video, so do not even think about stealing a car.

It is not what you say/write but the way that you say/write it. We had a neighbour, a very nice young lady and had two children. Her mother tongue was French, but also spoke and understood perfect Swiss German. Her husband was Swiss German and the kids grew up in two worlds of language, but she had words that could be continuously used in both languages. “That is genial” whether they had bought a new car, the kids had new clothes or she noticed I had a new plant in the garden. We were constantly “genial”, a useful word with an international meaning.

In my mish-mash of languages I really no longer care. If you understand me OK, if not that is your problem. I do not allow words to interrupt my line of thought when I am writing one of my super perfect blogs. They are all super (I love that word). Of course it could be that a fragmentose collubrication of pommel chackles might golumph the flossing of my trumbs, but do not despair. Now and again I have a conversation with Lewis Carroll in my dreams. We have various ideas about how the Jabberwock walked, what he ate and whether he had a punker hairdo or just a normal crew cut and of course we carry on our conversations in Jabberwock, a language containing references to the frumerous bandersnatch and the jubjub bird, although I often throw a few words of my own in the sentences. It is a secret language, a shangle of golobrious brams, changling on the paths of nonsense, but Lewis and I know what we mean.

“Du Schätz, wo isch der shopping list?” – a small sample of Angloswiss language when talking to Mr. Swiss (where is the shopping list).

“Chei Arnig” no idea is the answer from Mr. Swiss. He very rarely mixes languages and stays with Swiss German, so I have all the problems of simultaneous translation in my internal interpreting system.

Es cha mangisch scho e chli frustrierend si wänn mir zwei Sprache rede – oh sorry, you see it can happen so easily. What I wanted to say was that it can often be frustrating when we speak two languages (original was in Swiss German). I must often cast a glance in my online German-english dictionary to find the correct word. I have to go a step further. My brain thinks it in Swiss German, I have to process the thought into proper German and then if I am lucky I will find a suitable English text, although I can usually do it all by myself.

I do not really care if I put my “I” before “e” except after “c”, because the main thing is that you understand what I want to say, although to be quite honest I often do not understand it myself. I remember the first time that Mr. Swiss was confronted with a cockney discussion when he met my relatives. “What did he say” he would constantly ask, although Mr. Swiss speaks very good English, but not cockney. He eventually gave up and just nodded to be polite. Over the years he has got accustomed to the various dialects of the English language and to be quite honest if I watch an American film, I often have a problem with some of the expressions.

So do not ask me for examples of words, otherwise my nonsense plonks will trampiful pits of clongs and the plankle bird will appear and gulp it all down.

I am a little late today, as a call at the docs was necessary. I was again having golden oldie aches and pains in my rear parts, this time they took over a complete leg almost, causing a sleepless night. However the doc cured it all with an injection in a very tender part and a packet of tablets. I got a second packet of tablets to coat my stomach in preparation for the other packet of tablets. This is all very complicated. She found it should do the trick, but has made an appointment at the hospital to have the internal workings of my hip joint photographed from the inside, one of those interesting photos full of bones and tissues. Oh, what fun, I am again important and will leave my mark on medical history. I told her I was not keen on having a hip replacement, but she really cheered me up when she said I was too young for that.

Have fun everyone. I have a garden to water and a book to read. See you all on the flip side tomorrow, if my hip is still moving.

Daily Prompt: Sound Right – if you know what you are talking about

12 thoughts on “Daily Prompt: Sound Right – if you know what you are talking about”