Do you play an instrument? Is there a musical instrument whose sound you find particularly pleasing? Tell us a story about your experience or relationship with an instrument of your choice. 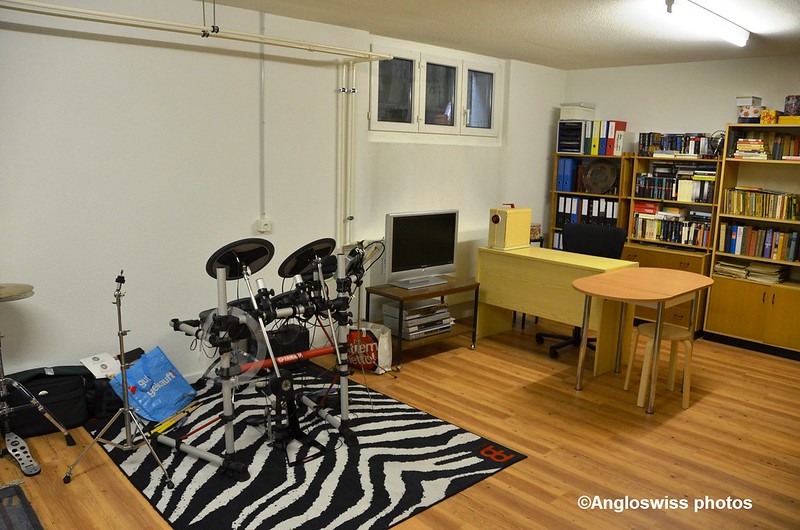 Before we all begin to be excited and thinking that Mrs. Angloswiss has a hidden talent and is the Mrs. Buddy Rich of the drum world, forget it. This is a practice drum set belonging to Mr. Swiss. He otherwise has two sets of real drums distributed around the country. One in our cellar, ready for a public performance with other golden oldies in his trio/quartet/quintet or whatever he happens to belong to and another somewhere in the Bernese Overland which will soon be moving back to us, meaning we will have to find the room for it in the meanwhile. There might be a new formation and place to rehearse, but until then we all move over.

Drums are a complicated instrument to play. Most other instruments you can put in a little case and carry them quite easily. Having drums can be a problem. First of all you pile it into the back of the car, hoping that the car is large enough. You arrive at the place where the performance is and carry them all piece by piece to the stage. Then the fun begins assembling them all before actually playing. A trumpet player just opens the case and is ready to go. When the concert is over the drums are again disassembled, in the transport, and home again. Mr. Swiss has back problems which does not help.

He likes to practice the drums; we all like to practice our music instruments. Imagine living in an apartment building and playing drums. It could be that you have neighbours with sensitive ears and sensitive everything – a reason not to practice. Mr. Swiss is devious in his way, he has an electric practice drum set. Put on the ear phones and beat away and you only hear yourself. With some accompanying music, you are the Art Blakey of the drum world in your own cellar. Mr. Swiss plays jazz, so a Charlie Watts or Ringo Starr would not come into the question. Of course, now and again he cannot resist trying the real thing. That is when he returns from the hobby room in the cellar and asks “did you hear anything?”. Of course I hear nothing. I do not hear so well and the hobby room is on the other side of the house. Our neighbour quite likes drums and so she had no problem. The neighbour moved out a week ago. We do not yet have a new neighbour: time will tell.

Having a drummer in the family is no problem for me. I am naturally the concert pianist in our group. I might have inherited the talent from mum and Aunt Lil. They could tickle the ivories quite well at a family party in the East End of London. Everyone had a piano in the old days. The right hand would pick the tune and the left? It would accompany something like “boomp, boomp” the fingers in a two beat thumping on the keys. They had no problem with harmonics but that was not important, just beat it out in rhythm. Most of the relations at the party had more problems in where to put the beer glass or singing out the words that they never really thought about harmony.

I inherited the party piano from mum. The piano was already 20-30 years old when I began my piano lessons at school. It was no longer in perfect condition and from time to time there was an internal explosion, when one of the strings snapped. Eventually I was playing piano with three broken chords. I think Jimmy Durante’s song about The Lost Chord was based on my piano. I was tinkling away before having lessons. The school were giving free weekly lessons to a group and “free” was always a welcome word in mum’s ear. Eventually the free lessons finished, but I had the opportunity to continue at a good price. Mum could have had visions of a Clara Schumann in the family, if she had ever heard of her, but she decided that my talents should be encouraged nonetheless.

I quite enjoyed playing and religiously practiced every day probably annoying all in hearing distance. The years passed, I travelled to Switzerland. I even gave lessons to the daughter of my boss in Zürich. They had a piano that no-one really knew was there and the daughter had fun playing. Eventually my married days arrived with Mr. Swiss and kids. I had no real time for piano, although we had one. My oldest step son played flute quite well. One day I took it in my hand, followed the flute book and really got something out of it, although it was not my sort of instrument. I did not become a rival to Sir James Galway.

My No. 2 son decided to become a second Gary Moore and learned to play the guitar. He had an electric guitar and I quite liked listening to the odd riffs he would play, although I think the neighbours less. Again thank goodness for headphones. Unfortunately the Stones never showed interest in my son, or any other well-known groups, so my dreams of a villa and swimming pool somewhere in California slowly disappeared. He now lives in a small country village, still has his guitar, but I believe his main instrument today is computer, as his mum.

I am asked if there is any musical instrument that I would find particularly pleasing. I still have my mandoline which I brought from a school trip to St. Petersburg in Russia in 1964. Mr. Swiss even restrung it once, but I cannot play it. That would perhaps be an idea. In the meanwhile I am quite good at playing the vacuum cleaner and the dish washer. Yes, my talents are manifold.

12 thoughts on “Daily Prompt: Strike a Chord – The Lost Chord”