You have to choose one flavour that your sense of taste will no longer be able to distinguish. Sweet, sour, bitter, salty, umami, spicy (not a taste per se, but we’re generous): which one do you choose to lose? 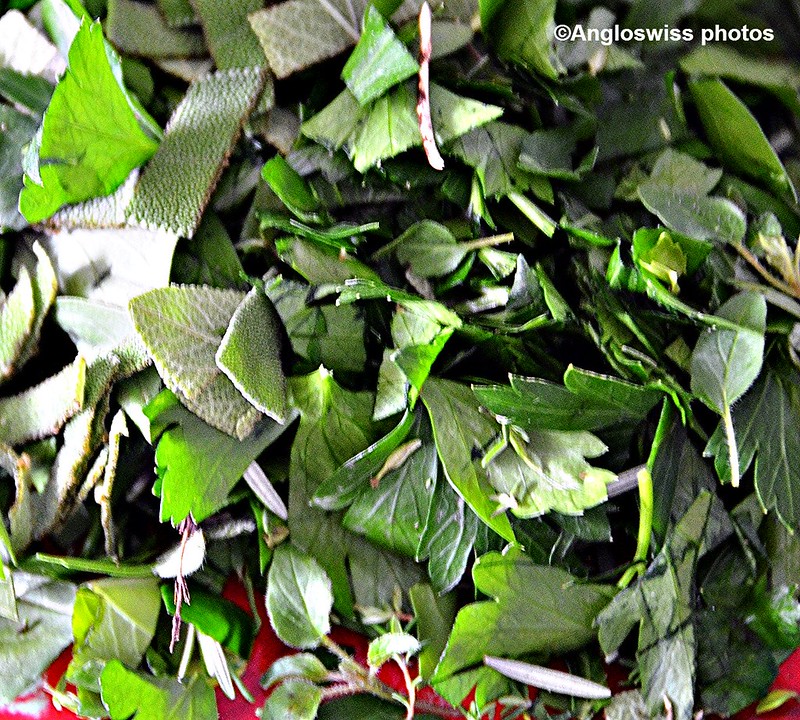 Here we have a choice of fresh herbs from my garden: see how many you can identify. None, or all – it does not matter, but throw them in the food and you discover a world of flavours. Now I am asked which flavour would I like to lose and the answer is none. This is easy to explain. I am now 67 years old and the body does not improve with age. It is not like a bottle of good wine that develops, mellows and is more valuable. It resembles a piece of fruit or cheese that you leave untouched out of the fridge for a few days/weeks. We do not actually grow green at the edges or start showing signs of decay, but changes happen in the exterior appearance. Your hair might develop another colour. I call it salt and pepper, although gradually the salt is taking over.

Hairs begin to grow all over the place, places you never thought it would possible for a hair to grow. Your smooth immaculate skin might be marked by a blemish or a spot. In your younger days you might have used make-up to enhance the good looks, now nature does its best to destroy them.

One of the problems is the sense of taste, my sense of taste. The buds that detect the saltiness, sweetness, and the spice of food slowly give up. They have been there and done it all and decide if it does not taste as it used to, then add some more. Mr. Swiss often accuses me of cooking hospital food. The meat and vegetable are fine, but no taste. I have to add more salt to convince him that we are not living in a hospital ward. For my still functioning taste buds, I now present him a dish which resembles something cooked in sea water. One day I will not notice this because I would have caught up with Mr. Swiss in years, although he will still be ahead. I will probably then cook everything twice, one for him and one for me.

Why lose a sense of taste when it disappears on its own eventually. Some years ago I was diagnosed with diabetes. No big deal, one of the punishments we pay for our sweet and sticky life, not to mention the nice white bread and pastry dreams. The doc said cut down on the sugar and carbohydrate. As I wanted to avoid being on the needle I did what he said. I began to drink diet Coke, avoided the sweet things in life being an obedient diabetic. I soon had my levels under control and it was a different way of life. I have noticed that over the years I am now very sensitive to sugar. I bake a fruit flan and Mr. Swiss sprinkles more sugar over his portion. If I prepare berries, I put them in a bowl, sprinkle them with sugar and leave them for an hour or so to develop their own syrup. Served with cream they are a very good desert. What does Mr. Swiss do? Yes, he sprinkles more sugar on them, as they are not sweet enough. This proves to me that I have lost my taste for sweet and sugary, it is sweet enough for me. I no longer need so much as I have been reducing it for many years.

On the other hand, I love spicy food and there Mr. Swiss finds I overdo it sometimes with the chilli: not exactly standing under the tap for water to heal the burns in the mouth, but it is probably his Swiss genes that are a problem. Switzerland is a milk, cheese and cream producing country and the spice of life is a cheese fondue.

So I do not have to choose a flavour to lose, they choose themselves. Another reason why I probably will not receive my so longed for WordPress t-shirt this week.

Further in the story of my lumbago: interesting development. Yesterday I was walking around like a hunchback of Notre Dame Lookalike and Mr. Swiss found it was time for me to go to the doc. It was Sunday, no doc, but this morning I phoned and explained my symptoms. She was of the same opinion as me, lumbago. She found either send Mr. Swiss to pick up the tablets or come along for an injection. This morning I was not even able to go along for my computer so I decided an excursion to the doc would not be advisable. Sitting and standing had become something impossible. I crawled to the kitchen, let out a small scream as I sat at the table for my breakfast, and spent five minutes working out how to stand again after breakfast was finished. I retired to my bed and remained more or less all morning.

Mr. Swiss visited the doc for me and arrived with a whole barrage of tablets. The first was to protect the stomach lining being dissolved from the other tablets: take one in the morning. The second tablet was a normal pain killer, coupled with codeine and the third was cocaine the real McCoy to stop the lumbago pain. I took one each, one after the other. In the meanwhile I dragged myself through the apartment with the vacuum cleaner and cooked lunch. Bear in mind I had not had a shower up to this point. I was still trying to work out how to climb in the shower and survive well enough to climb out again. After dinner I fell onto the bed (at the moment it is not otherwise possible to hit the sheets, I just let myself go) and slept for at least  ninety minutes. I made an attempt to rise and almost shed a few tears: there was no strong pain and I could stand up without resembling a bewildered beetle turned onto its back. I immediately visited the bathroom for a shower, while my joints were working.

Things can only get better. I am not yet 100% but on the way. Mr. Swiss emphasised that I should take it easy. He was especially annoyed that I planted a new garden bed on Saturday, but I just wanted to get the job done. I suppose sometimes he really has a point. Both of us are now arriving at the “Darby and Joan” age, where now and again we need the support of the other, but we are two independent golden oldies, and when he has back ache I am in charge and when I have back ache, he takes over. When we both have back ache, we leave it to chance, or the cats.

I am now looking forward to my desert of two tablets after tea. Just what the doctor ordered. See you on the flip side tomorrow, even if I have to crawl to the computer (now that’s worth a WordPress t-shirt – true devotion).