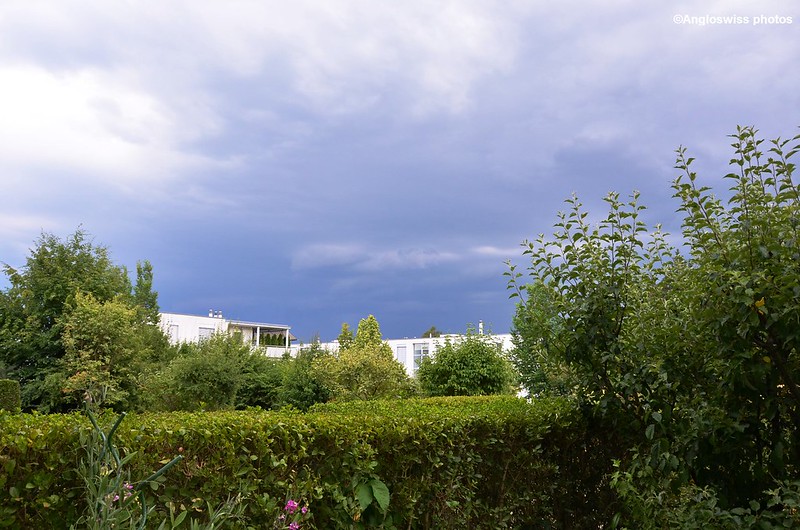 I had finished my evening meal which is basically refridgerator choice on Sunday. This Sunday was not such a large choice, as we had been eating through the week-end. My son took the remainders of lunch and so I was left with some sort of undefinable potted meat and cheese. For a Swiss the potted meat is ideal, but for an exile english person it did not really tempt, so I decided on the cheese. Of course a nice piece of cheddar would have served the purpose, but even this was only the “remains of the day”, so Hobson’s choise was Greyerzer, a Swiss lookalike cheddar which I sliced onto bread and butter. I did not starve and I was saved.

I was outside on the porch or deck or whatever you call it, relaxing, reading on my iPad and basically enjoying life, as much as possible with my frugal meal. I then heard it in the distance: a rumble, somewhat subdued, but it was there. A storm was on the way. I did not really mind. We had good weather all the week and every evening I was turning on the hose and pouring water over the garden. This was disturbing work, as I would rather have been relaxing and enjoying a quiet reading session. I was relieved, no watering of the garden, I was saved. We are going to have a storm. Suddenly a strong wind arrived from nowhere, to support the stormy feeling. Mr. Swiss joined me and we were busy collecting pieces of plastic paper that had been blown onto our garden from a balcony above. No problem, these things happen.

My next thought was: take a photo. The result can be seen above. A few minutes later the sky darkened and the sun was reduced to a glaring spot lamp between the black clouds. I was sure doomsday was arriving. I was relieved, this evening no watering of the garden, just cosy indoors and watch the TV. Perhaps there is a football match, although I remembered that one of my soaps would be running. I love a good soap now and again. Mr. Swiss has had his share of football this week.  I took another photo. 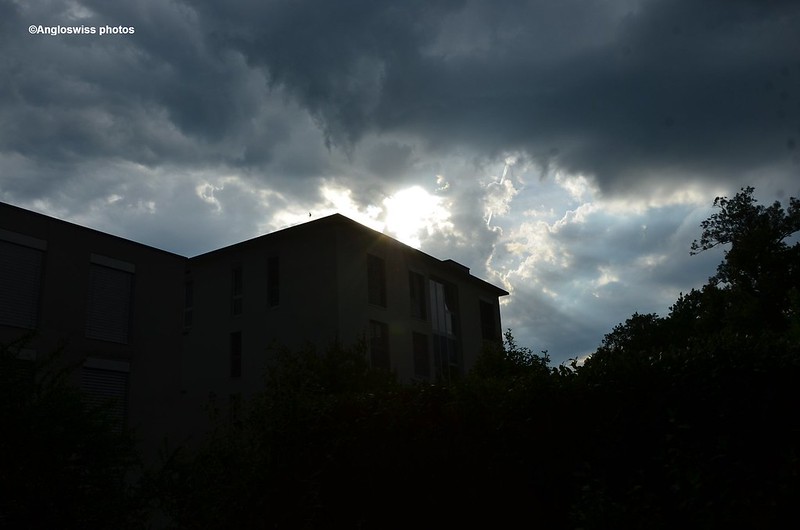 Doom and gloom: even my tabby feline decided to seek the safety of home.

So what happened next? I decided to put a brave face on the impeding tempest and remained outside with my iPad and camera. Then it happened. Unfortunately the sun poked its way through the clouds and the clouds retreated. Now we have one of those pleasant summer evenings and the worst is to come. I think I will have to water my garden. The weather forecast did prophesy there might be rain tomorrow, but I think it was just a wild guess.

One thought on “There is a storm on the way or is there?”