Today’s Summer Solstice, the longest day of the year (in the Northern Hemisphere). How are you taking advantage of the extra hours of light this time of year? Do you like it, or do you already miss earlier sunsets. 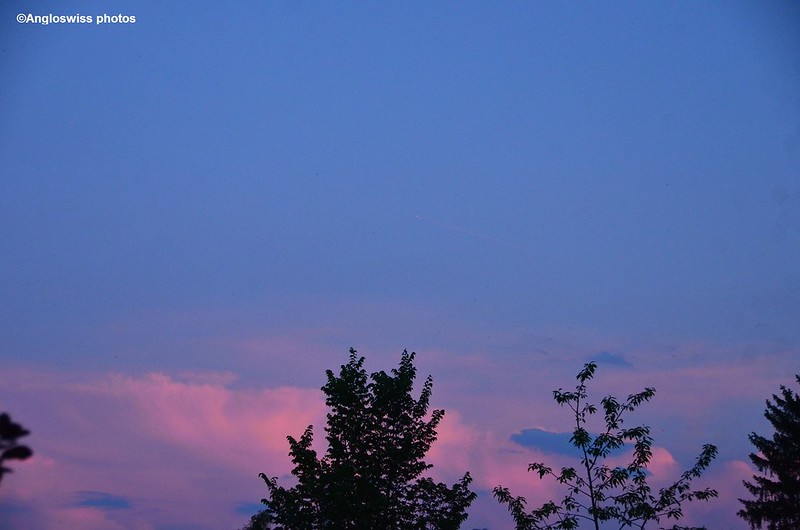 We have some pretty sunsets at this time of the year, especially if we have had good weather during the day. As the golden sun sinks slowly in the West, we do not have John Wayne slowly trotting into the disappearing width of the prairie, as we do not have prairies, just fields, cows, and a few mountains in between. All the same a Swiss sundown has its charm, even from my little village.

One advantage of this solstice thing is that I can stay outside until late and read my Kindle with no problems. I always have a book somewhere and uploading them from good old Aunty Amazon is a quickie and if I am lucky I can snap a free one. Only today I realised I was out of something to read, although not quite. I am in the middle of “Darm mit Charm” which is a German book, translated to “Intestine with charm” written by Giulia Enders, a German lady that has completed her medicine studies. Perhaps not quite an entertaining lecture on the long summer evenings, but she writes with humour. The journey of your food from entering the mouth being dissolved by the taste buds until it is dispelled in the canalisation system can be an interesting study. She throws in a few handy words of advice in the book referring to what and how to eat, so whilst lying on a sunbed outside on the patio in the long evenings, I am doing something for my body.

OK, not everybody’s sort of thing, but today I got an interesting offer to download a free book, a horror story (again in German) from Amazon,  so I might change books midway this evening and do some vampire spotting whilst reading.

What does Mr. Swiss do when I have deserted him for the wide open solstice evenings – no problem? At the moment there is something called “World Cup” in progression in Brasil. Evening my colleagues from over the pond have qualified for this competition. Yes, they are now kicking a round ball across a football field and are not wearing protective helmets or padded  t-shirts. They are exposed to the raw antics of soccer and are doing quite well I hear. So Mr. Swiss is taken care of, he does not feel lonely, having a TV soccer match to watch, although a little disappointed at the moment. I will not use the exact description he applied to the Swiss team yesterday evening when they lost 5:2 against France as profanity is not allowed on a blogging site. Needless today, whilst I was soaking in the intricacies of the human intestine in my book I was subject to cries of despair, distributed around the area where I live from other Swiss male members of the human race, my neighbours and Mr. Swiss, that were watching this catastrophe match. Not only were the Swiss a miserable failure, but they lost against the French, the nation that eat frogs. The Swiss goalie managed to save a penalty, which ensured that the result would not become 2:6 and it seemed that the Swiss goalie was the only person on the field that knew why he was there.

Nevertheless, the solstical evenings can be enjoyable (with the exemption of football matches that the Swiss lose). As it is the month of June, the June beetles tend to have their marriage flight in the area. Around nine in the evening they develop from their weevil state into a fully grown flying beetle and arise in flocks from the earth. Man meets woman, they land on the branches of the trees and it is a real mating orgy: one of the reasons I am not posting a photo, they might not be allowed on a blogging site. Most amusing are our neighbours that stand in the garden, each with a tennis racket in their hand. No, they are not playing a game of tennis or badminton in the warm evenings, they are aiming for the flying June beetles to ensure that no eggs will be given the possibilitiy of developing and  laid in the garden and no weevils will develop to make a feast on the roots of our plants: so is the path of nature. I noticed that this year there are not so many flying beetles, so it seems the reproduction of this species has been reduced due to the tennis match.

We also have a group of young men living in our apartment block. It seems they meet in the evenings to watch the football match together. Men tend to form flocks, enjoy company of like-minded of the species, uttering their cheers and boos together and, of course, ensuring that they do not suffer from thirst whilst watching the match. This combined with the chirping of the crickets and evening songs of the birds when relaxing in the summer evening air completes the romantic picture of the Sumer solstice..

Yes, I am enjoying the summer solstice, the peace and quiet of nature, especially thanks to the World Football Cup finals.

Daily Prompt: Set for Solstice and for a Soccer Match

9 thoughts on “Daily Prompt: Set for Solstice and for a soccer match”