Is there a word or a phrase you use (or overuse) all the time, and are seemingly unable to get rid of? If not, what’s the one that drives you crazy when others use it? 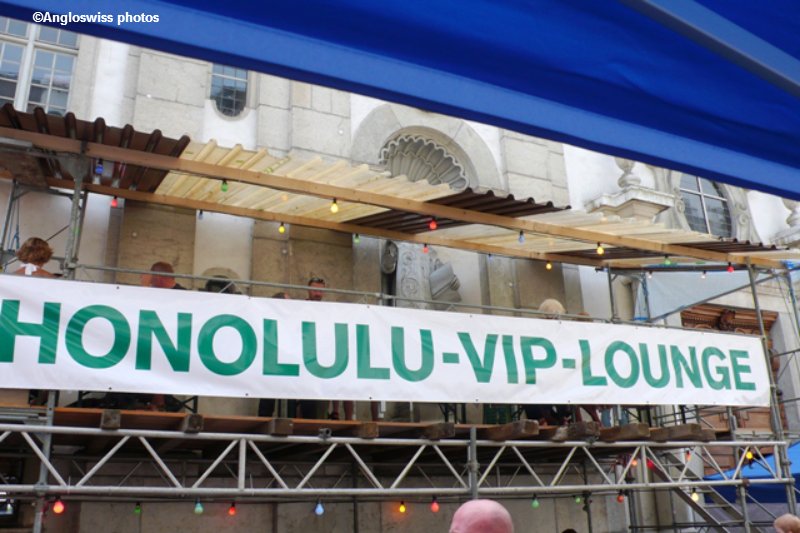 We all do it really, use the same words, the same expressions: sometimes I am aware of it and sometimes it is just me. Without my boring constant expressions, I would not be me. By the way of you think I have moved to another country and have now settled in Hawaii, do not worry I am still somewhere in Switzerland, yodelling my way along. Our town of Solothurn becomes Honolulu during the carnival season. This is a year old tradition and as I cannot illustrate words, I found this photo in my carnival collection. This was a sign on a bar especially constructed for the occasion.

Now to the words which are generally overused. I must lead you into the corridors of Swiss German, as I only hear this language every day. Of course, I can still speak English, but when in England I really only hear cockney – you know where they “ain’t got nuffing”, drop their ‘aches at the beginning of the word and the general greeting is “’allo mate ‘ow are ya” or when wanting to read the newspaper “can I ‘ave a butchers at the black and white”, so work that out for yourself.

There are words and phrases that do not actually annoy me in Swiss German, but you hear them constantly according to where you live. My first two years in Switzerland were spent in Zürich and they have their own little ticks. Sitting on a tram I hear two men having a conversation “luege e mal” (have a look) constantly being said as if they are worried that they miss something out on their tram journey, or every sentence ending with the word “oder” (or). I can tell you this “or” thing really gets on your nerves. “I think I will buy some apples – or?”, “we could go to the cinema – or?”, “I will cook some sausages for lunch – or”, yes it can get rather monotonous at times.

Then we have the “quasi” people. This word is even international, but the Swiss discovered it and absorbed it as a daily word into their language. “He was quasi good at his job, “weissch  was ig meine” (you know what I mean – another wonderful phrase) and for good measure if you are in Zürich you can add an “oder” (or) at the end of the sentence.

Of course the younger generation in Switzerland that have learnt English, have their favourite phrases. Ask them a question, even in Swiss German and the answer nine times out of ten is “no problem” in english, even if they cannot speak the language. “Can you lend me that newspaper?” answer : “No problem”.

I remember one of the bosses where I was working. Now and again he would give a lecture, an explanation about something new in the manufacturing programme. “It is a new development, it can do everything and “Weiss dr gugga was” (what that actually means I never found out and I believe it is not even translation possible, but it goes in the direction of “anything you can think of”: not exactly a sign of high intelligence, but I did not like the bloke in any case – he was a show off).

Just a moment Mr. Swiss has asked me a question. I will give him one of my super intelligent answers which speak volumes “Chei Arnig” meaning I have not got a clue. I love those two little words, they always guarantee a short conversation.

And now I will come to a close. I bought eight lovely blue balloon flowers this morning at the supermarket. I had been waiting for them to come onto the market. They last for ever, are small when planted, but grow quite tall the following years. I planted them and discovered that eight were not enough, so I sent Mr. Swiss to buy another four. He is a lovely person, he volunteered immediately. That was an hour ago and I have not seen him since. Did he perhaps seize the chance to escape from my clutches? Did he need a rest at the supermarket café for a mental relaxation? Chei Arnig – oder. And if you did not understand the last three words, you have not been following my elementary beginner’s lesson in Swiss German, oder?