What’s the one piece of advice you wish someone had given you a year (or five, or ten…) ago? 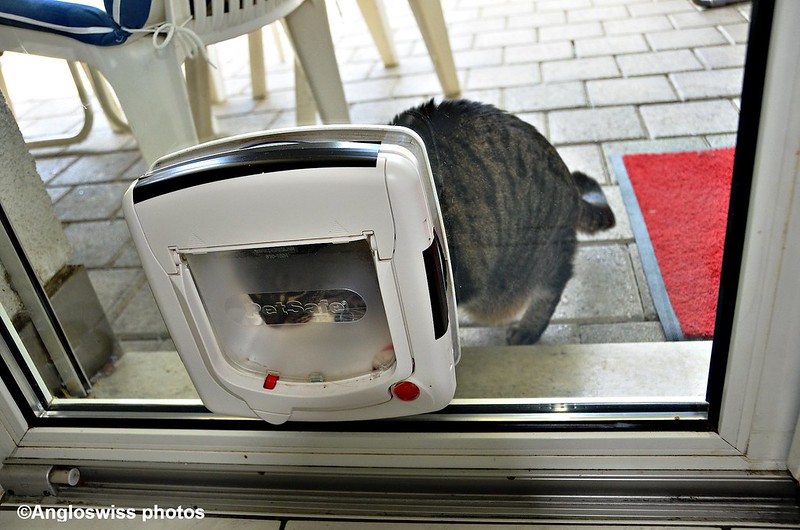 Like do not let felines into your home, they take over, organise your life and things will never be the same again. You even have the window removed and organise a cat flap to make it easier for them to enter their home. It cost a couple of hundred Swiss Francs/US $, but who cares, it is all in the support of a good cause.

Perhaps I wish someone had told me to leave my hands and thoughts away from The Daily Prompt. I would then not have to join the Daily Prompt Anonymous, where I enter the room, take a place in front of all the other addicts and say “my name is Angloswiss and I am a daily prompt addict”. It might even go further, not only a daily prompt addict but, oh shock, I am addicted to Pingbacks. You do not know what a Pingback is and do not know how they work? I will not tell you. I cannot carry the responsibility of turning you into Pingback terrorists, listing the daily link contributions at the end of your blog and forcing people to acknowledge them. I heard there are WordPress workers that wake up regularly from a reoccurring nightmare where they are being devoured by Pingbacks in all sizes, forms and colours.

And now for the main question: which piece of advice do I wish I had received? Perhaps hands off from games in the Facebook World, although I would probably have ignored this recommendation. I ignore most pieces of advice, I know everything better. Avoid Café World, Farmville, Chefville and Yoville. In the meanwhile I believe Yoville is now a deserted city and Farmville has expanded to incorporate five or six various farming varieties even including Dirt Famers and there seem to be problems arising in the growing of Jacaranda trees at the moment. I am cured of my addiction (otherwise I would not have time for my Daily Prompt addiction) and found that there is quite a lot of correspondence in Internet about the Jacaranda problem on Farmville. Even Wikipedia seems to be involved.

There was a time when my daily life revolved around these stupid Facebook games. Perhaps it was a replacement for my daily work routine. It was after being retired, and there was an empty space in my intellectual well-being. I filled it with Facebook and all the symptoms. One day I awoke and a sharp ray of sunshine seemed to part the curtains and I am sure I saw words written in flaming letters on the wall, “Beware the Facebook games”. I arose and switched on the computer and saw my successful café full of customers and dishes ready to be served. The sharp ray of sunshine had followed me from the bedroom and had now formed an aura around my computer. I made an attempt to serve the imaginary dishes in my imaginary café and felt an electric pulse on my fingertips when I touched the enter button on my keyboard.

I decided it was time for cold turkey, checked my computer to see if I had received an e-mail from the president of Switzerland and this not being the case I closed the computer, pulled out the plug and decided to catch up on what was going on in the real world and read the obituary column in the newspaper. I was reborn, the sharp ray of sunshine had disappeared, it had started to rain, but I was cured until I discovered The Daily Prompt.

This was something completely different, WordPress wanted to know all sorts of things about my private life, they were interested in me. Of course, I only tell them what I want them to know believe, and I am cured from the Facebook game purge although WordPress made a suggestion that I could have my own little site in Facebook, naturally combining it with all sorts of links to WordPress. I was curious and so if you miss my meaningful psychological theories on life on the WordPress site, you can always like The Angloswiss Facebook Zone (surreptitous advertising from me) and increase the member count.

Today is a stress day. It is Tuesday. This morning I was busy cleaning the bathroom, which I do not like cleaning. This afternoon I was away for two hours with my golden oldie ladies practicing our Tai Chi together. Before I left Mr. Swiss to his own devices his last words were “Do not make any false movements” which is not such a danger as Tai Chi is slow and careful. The only danger is perhaps falling asleep during the action.I returned, tired but happy and there it was again. My first movement to the computer to see what the Daily Prompt is (no, I am not addicted really) and found that it was a busy day, almost rush hour in the Daily Prompt Underworld. There were already more than thirty contributions. I had to check through them all, prepared the pingbacks and now I have finished my contribution for the day.

My name is Angloswiss and I am a Daily Prompt addict.

12 thoughts on “Daily Prompt: Powerful Suggestion – which I usually ignore”