What’s your most prized possession? GO! 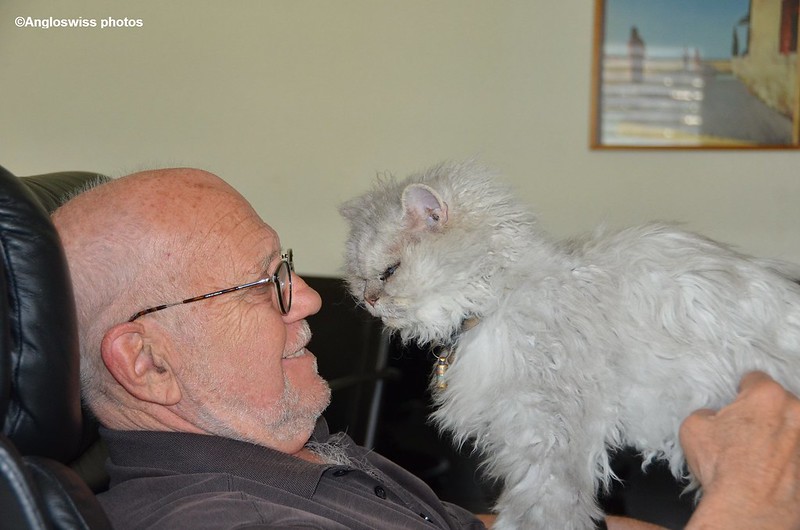 Most prized posssesion? As usual I asked Mr. Swiss as I did not know which possession to tell you about, and as usual he came with his carefully thought out solution – where would I be without his wisdom and uncanny knowledge? Now you know the secret behind my blogging success, without this support I would be lost.

Mr. Swiss was having a discussion with Fluffy, my Selkirk Rex and they were sharing a joke in the photo (he can even speak meow). So now for the answer: Is it Fluffy or Mr. Swiss? Mr. Swiss found that the solution was Mr. Swiss. Fluffy only functions by instinct and tuna fish meals. Mr. Swiss said he was free, cost nothing (at the beginning) and where would I be without his support and knowledge of the Swiss way of life. This is true.

I still do not have a clue about how to fill out a Swiss Tax Form and the television with its mysteries of DVD manipulation is still a problem, but he knows all the answers. He also supports me with his thorough knowledge of the Swiss German dialect, although I must admit without my cockney English instructions he would have been lost on our visits to London. He was only taught the Cambridge English at school.

Of course, the whole theme of this blog is more to find out the valuables I have stacked in my humble Swiss household, but I realised that on the way through life I lost a few, could not remember where I put them, and objects do not have the same value as a person. Without Mr. Swiss I would be in dire straits. He drives the car when we go to strange places where I have never been. I am not so good at driving on motorways or through strange unknown Swiss villages with unpronounceable names. He also influences my choice of the daily meal plan and if I do not know what to cook, he always has a solution (although perhaps not always to my taste).

This works in the other direction. I taught him how to iron shirts perfectly and the bed linen. He constructs a perfect salad dressing. Here I must be honest. In the early days of our “getting to know you” situation Mr. Swiss realised that his chosen mate was only accompanying the meals with vegetables, not that he did not like vegetables, but now and again his Swiss heart was missing a healthy salad with the accompanying French or Italian dressing. Unfortunately his chosen mate was English and English salads were at that time (we are talking about 46 years ago) covered with a splodge of 57 variety Heinz mayonnaise. I realised that this was no rival to a real genuine continental salad sauce, so I avoided the Angloswiss confrontation and constructed no salads. Probably we were suffering from vitamin difficiency so one day the crucial question was uttered “Why do you never make a salad?” I had to confess I did not know how it worked, but no problem. Mr. Swiss produced the necessary ingredients and demonstrated. Success, and since this day I have spoilt him with my salad dressings in many varieties. Now and again we have a slight disagreement whether to use fruit vinegar or white wine vinegar, but this obstacle has also been overcome. I make it and he has to eat it.

His political knowhow is boundless. There is no Swiss government problem that he cannot solve, better than the government can. For this reason I allow him to complete my voting papers when they arrive, although I usually ask him what it is about before he fills out the form, just to be sure that his decision meets with mine. It generally does, but there are always exceptions to the rule.

Yes, we are one heart and soul in our marital life. Today I am a little late with my daily blog. It is Tai Chi day and I was with my golden oldie colleagues this afternoon for an hour spiritual and physical preparation. Whilst I was away, Mr. Swiss took a walk on the local country paths, he does not do Tai Chi, he is more the action man. At the moment I am sitting on my own writing my daily prompt (in praise of Mr. Swiss, my most prized possession) and in consideration of my need for ethereal contemplation he has disappeared for a practice on his drums in the cellar , action pure – yes I can thank Mr. Swiss for my boundless knowledge of the modern bebop mainstream jazz etc. etc.

I am running out of words of praise, so will complete this laudation to my most prized possession and hope that tomorrow’s daily prompt has something more realistic and down to earth like “Do You Prefer Bruce Willis or Tom Cruise?”

20 thoughts on “The Daily Prompt: Pride and Joy in Person”