What’s the biggest chance you ever took? Did it work out? Do tell! 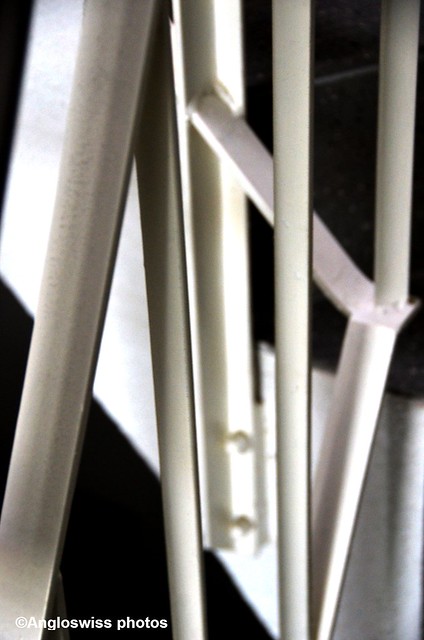 No this is not a photo of my brain showing its complexities, turns and angles of decisions and thoughts, it is a view of part of the staircase in our apartment block. I walk pass the metal joints many times during the day and on one of my excursions to my washing room in the cellar in the evening I took my super DSLR camera and made a photo, again hoping for a Pulitzer photo prize: another disappointment in my life. The chance I took here was actually being able to take the photo without stumbling on the stairs and breaking a leg.

Life is full of risks, especially if you are me and blog. They just hit you out of the blue. Everything seems to be taking its normal path, nicely going along at the golden oldie pace of time and then, bang!!! This week there were a few bangs. I had an emergency trip to the doctors last week, thinking I was on my last legs and it was just a normal little stress situation. It seems I had been overdoing it lately, like visiting Dad in England, getting him settled in his new home, buying him a micro wave and settee and a general upheaval in my nice little daily routine. I have now recovered after finding room in my tablet taking plan to fit a couple more in and it seems to have worked.

Just as things were evening out and I was back in the old routine it happened again, but this time it was a crash bang. My daily prompt did not arrive in the usual place and the usual time, although this was completely my own fault. I did not understand the new great look that the WordPress people have given us. After a few words of dispute and some remarks, this misunderstanding was ironed out and I have again found my little nook and cranny in this wonder world of blog. It was my own fault for being so obstinate. I should have shown more understanding for the situation. The good old familiar looking prompts are still there, a sort of déja vu thing with the titles, but with my daredevil way of dealing with the unexpected, I have survived and am still here. I have decided to take it easy and swallow it all, come what may. After all I am paying for this blog, the price of being a .com person and hoping for a little mention in the Pulitzer Hall of Fame.

My first risk seems was being born. Mum was so surprised and shocked that she immediately decided she would not do a repeat experiment. I remained the one and only, growing up all on my own, no brothers or sisters to play with, just a budgerigbeiar called Bill that arrived a few years later. He was not the best conversationalist, his vocabulary mainly consisting of the words “Pretty Bill”. He was a very conceited budgerigar, but he was all I had. He would spend hours looking into a mirror and admiring his yellow-green feathers, pecking at his reflection and repeating the only budgie words in his language “Pretty Bill”.

Perhaps moving to Switzerland at the age of twenty could be looked upon as taking a chance, although I found it to be more a change of scenery, language and doing my own thing. Yes, this budgerigar person flew the nest and was on her own making her own decisions and not having to do what the others wanted or expected. We all learn by our mistakes and I made a few, but am not going to indulge in regrets or tell you about them. Je ne regrette rien, and if I told you about them 50 shades of something would have looked like a choirboy in comparison. Perhaps I should not have begun the daily prompt. It grows on you like an ivy, entwining its leaves into the very nucleus of your computer and you almost become addicted.

Today is Good Friday, although I have not yet found anything good about it. I had spent most of the week shopping and organising life as the shops are now closed until next Tuesday, with the exception of Saturday. Saturday is the day when Mr. Swiss is let out to do the shopping and who am I to interfere? The cupboard and fridge are now full. This morning I was recovering from the pre-Easter stress and am glad to say that no-one has invited me anywhere, I have not invited anyone to lunch or dinner and I am looking forward to an Easter hibernation until next Tuesday. For those that have something planned for Easter, happy Easter, and for the others, take it easy. And now to perform the one and only Pingback that remains, MINE.

The Daily Prompt: Take a Chance On Me

5 thoughts on “Daily Prompt: Take a Chance on Me”