Are you a sports fan? Tell us about fandom. If you’re not, tell us why not.

A new word – Fandom: I had to look it up in Wikipedia to make sure I was not being led on, but it exists.

I am not an active person; prefer to watch than play, but in my school days I was in the school land hockey team as a defender. It was the only game that resembled anything like football, for ladies to play.

Tennis was not my thing, the ball always seemed to go upwards instead of forwards when I hit it and I never did understand the scoring system. Even today the game just bores me, although now and again Switzerland wins something, so we all cheer and are happy. Formula 1 2, 3 and all the rest is too noisy for my taste: cars racing around a track, poisoning the air with their fumes. The drivers are celebrated afterwards, but I wonder if it is because they survived.

Bicycle racing is quite popular in Switzerland. There is a tour de Suisse, where they sometimes even race through our little village and I have even been known to stand on the road side with my camera. There is also a Tour de France and a Giro d’Italia, the same sort of thing, just taking place in other countries. I quite like watching it on TV, mainly because of the scenery shown. I cannot ride a two wheeled bike, have balance problems, something I have never really given up on, but Mr. Swiss says “No” too dangerous for me, thinking of broken arms, legs and anything else you can break.

My real love was and still is football. I do not mean that game played in the states where they all wear helmets for protection, have a slightly egg-shaped ball and do a Superbowl once a year. My oldest son has been known, in his younger years, to stay up until early in the morning to watch this exciting and brutal energetic game. He even explained the rules to me, but I got lost on the way.

No, I am talking about football, the one with the round ball,  known as soccer on my side of the pond: 10 men chasing a ball and one in the goal. Look at my first photo, my team stadium, West Ham United. My dad was a West Ham supporter and so am I. I spent many Saturdays at the Boleyn ground, Upton Park watching my team win (or lose now and again), it was just in my blood. Claret and blue are their colours and do not forget the great Bobby Moore was their captain and played for them. I even saw him play one of his first professional games for the club, being then just a young teenager.

I remember when West Ham won the English cup final in 1964. The next day on Sunday morning dad and I made ourselves ready to go to Stratford High Road (East end of London and where my dad originated) to watch the players arrive at the town hall. A large coach came along the road with all the team, and stopped. They left the coach and were afterwards seen on the balcony of the town hall proudly showing the cup. I have never forgotten that moment. Of course, afterwards, dad and I retired to a public house/bar where he was a regular when a young man. He was so happy, he had seen our team with the cup and in the public house met all his old friends from earlier days. That was a fun morning. A week later we all met up again in the same pub on a Satuday evening and mum came with us.

So yes, I was a football fan: I still sort of am, but as the years go past, the glory days of earlier fade. Now football has become a money game. Footballers earn more than millionaires, are millionaires, and a lot of the sparkle and team spirit as dwindled over the years. I knew every name of the West Ham/England team during the beginning of the sixties, and today the English team players have names you cannot even pronounce, are no longer English, and the national team seems to have shrunk to the leftovers with a British passport who can be lucky to be encouraged and have a chance with a good trainer.

Here is a photo of a monument to be seen near the West Ham stadium showing their best players: Bobby Moore, Geoff Hurst, Martin Peters, all of whom I saw play for West Ham when they first player for the first team, and also including Ray Wilson who I do not remember. 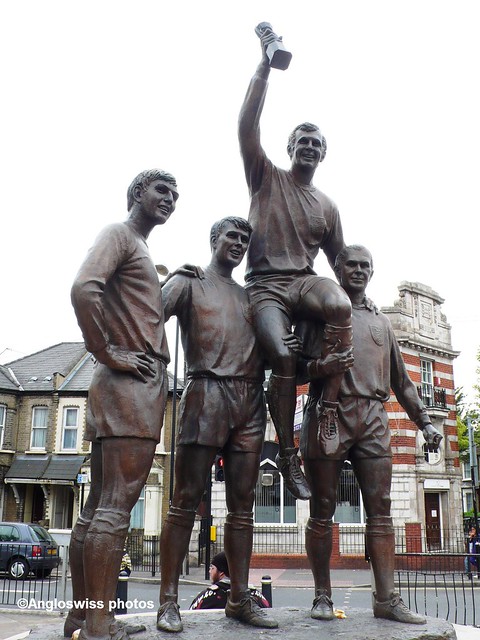 All photos taken by myself on a London visit to West Ham United Stadium, Upton Park

Well I was asked about Fandom, and there it is. Of course, I also like to read Scandinavian detective stories, fantasy and horror fiction and some German thrillers, as well as a few British, I do not actually read books, I devour them. Just call me a book fan. I just noticed if I continue I will write the longest blog of the year (a chance to enter the Guiness book of records?), so I will leave you with the West Ham team and Bobby Moore holding the cup on the statue.